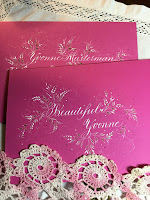 I don't intend to be preachey all of 2016 but I feel the need this first week of January. Bear with me for now! When I want to convey something cheerful in script writing my default setting is English Roundhand. From the minute I picked up a pointed pen, my natural tendency was to produce rounded letterforms with weighted shades on the downstrokes. English Roundhand was not the first script I attempted. My first love of writing was Spencerian Script! My introduction to Spencerian Script came in 2003 at the IAMPETH convention in Cleveland, Ohio. That is where I had my first class with Michael Sull and my journey and love affair with the pointed pen truly began. I attended my first Spencerian Saga in 2005 and attended several more over the years. The Spencerian Saga continues to flourish under Harvest Crittenden and her directorship and I recommend the Saga experience to anyone who wants total immersion in the Geneva On the Lake experience of Spencerian Script in the setting of Platt Rogers Spencer's home base. It will not be forgotten. I worked with Spencerian Script alone for many years. It was my correspondence hand and worked well with my style of flourishing. But when I was exposed to the work of George Bickham in The Universal Penman, my heart skipped a beat! 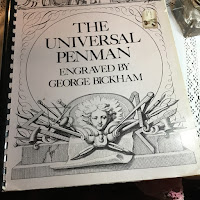 This is my worn and battered copy. I had the spine of it removed and a heavy duty coil binding added so it would open flat on my desk. It remains my most used resource in my studio along with Tomkins and Milns Ornamental Penmanship. 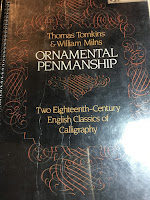 Both of these monumental works are available as Dover Reprints. If you don't have copies of these I recommend you run to get them!!! Inside the books, I was mesmerized by the content. The forms are voluptuous and elegant. The lettering brings me so much joy. Both volumes contain not only fine examples of English Roundhand but also my beloved Italian Hand which has become my favourite lettering style. 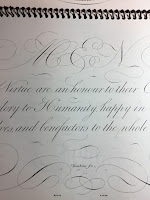 In the back of Bickham's book you will find pages with various styles of lettering. 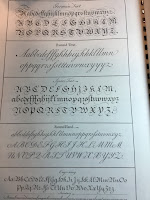 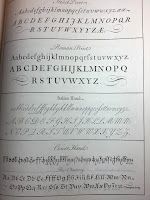 Terminology is a weird and scary ride in the calligraphic world. I have witnessed divisive and derogatory behaviour over terminology. I don't dwell in the land of division. My hope is to build bridges and encourage the lovely art form. If you are an educator or artist who is promoting the love of lettering and sharing your skills with others, I applaud you. As an educator I feel that part of my calling is to bring others into the joyful relationship that can be found with the pen. My personal love is the pointed pen. That being said I see work being done with the broad edge that is positively breathtaking. I love the beauty that can be found with that remarkable tool. Most of my time though is spent with the pointed pen as I flourish, practice English Roundhand, Spencerian or my beloved Italian Hand. Yes... Italian Hand is my runaway favorite and I will be commenting more about it in future posts!!! For anyone interested, I will teaching Italian Hand at Binders in Atlanta this coming March. I still consider myself to be a relative newcomer to the calligraphic world. Lettering holds surprises for me every day and I am still filled with the same sense of wonder and awe that I had when I first picked up the pen. It didn't take me long though to encounter opinions and ideas that some people found superior to others. I remember being taken aback at some heated discussions and opinions arising over the word copperplate. I didn't understand it then and I try to avoid the division over it now but I don't shy away from discussing it. I did dive into years of research over the term and I came across a variety of ideas and opinions. One book pointed to 'copperplate' as the reason for the decline of Western Calligraphy. I don't share that opinion and choose to elevate this script lettering as one of the most graceful and elegant styles that can be created with a pointed pen. I recognize that others think differently but see no reason to divide over vision of a script hand. Maybe I am missing something, but I think if we love lettering, we are on the same team and all do our parts in promoting the lettering arts. Each of us adds our own chapter to the story and we bring with us the ideas and experiences that shape our opinions. No one taught me or told me to use the term English Roundhand, I just landed there. I remain there because for me, it is the most descriptive and accurate term for the style of script that I want to emulate. This is just my opinion that I have arrived at through my own personal reasearch. I recognize that there are many incredibly talented script artists who have arrived at the conclusion that the best term to use is copperplate. I still love and respect their work. Despite all of us having our love of lettering, we will all possess diverse opinions. That is to be celebrated and encouraged but never feared.This plate from Tomkins and Milns explains it best for me. 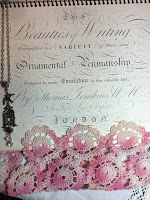 "Beauties of Writing exemplified in a variety of Plain and Ornamental Penmanship. Designed to excite Emulation in this Valuable Art." That says it all!!! Free the caged bird! Learn what you can from others but never think that is the only way to learn. Never shy away from original research, if your opinion is different even from someone you respect, its ok to express yourself. Never underestimate what can happen when you study for yourself. Take what has been printed before with a grain of salt..including this! You will come to conclusions that no one else can lead you to. Love what you do and do what you love!
Posted by Heather Victoria Held at Thursday, January 07, 2016

Well said, Heather! We should always focus on what we share in common, rather than our differences.

Thank you Jennifer!!!! Big hug to you!

So glad you said accept that there are differences in viewpoints & we should focus on what the commonalities instead of looking for something to nitpick. I attended a workshop several years ago where the atmosphere was became tense after a discussion became heated regarding terminology of hands & letterforms. To me, it's an argument that should never happen. Since a language can have words that develop different in different cultures & countries, it stands to reason that the same will occur in terminology. A prime example is the English language, with words that can mean one thing in British English & another in American English. An example is the word bonnet which is a headcovering in American usage, but is also used to mean a car's hood in British English.There are so many books about different lettering styles & they will usually contain something different from another. I think the differences contribute to a romantic side to lettering, especially in the pointed pen scripts. It's such a waste of energy to argue about such things. So glad you have offered a viewpoint, which I hope is held by most everyone. Personally, I've always liked English Roundhand more than Copperplate as a name for the hand.

Thanks for these comments Linda!!! As I travel and teach I hear so many different stories and points of view! It's all so interesting!
Big hug to you!
Heather

It's funny how in the UK we refer to it as Copperplate rather than English Roundhand. In fact if you said English Roundhand to most Brits they would look at you & say "What's that?" It took me a while to realise they were the same! But as long as we are all singing from the same hymn sheet does it matter about the name. It's hardly worth arguing about it but I know a lot of diehards here in the UK dislike anything to do with a pointed pen.

The rest of us just smile & get on with it!

Thanks for the comments Hazel. I love the ones who smile and get on with it. I have met so many diehards over the year who won't be caught with a pointed pen! As long as they are enjoying their pursuits, I enjoy chatting with them and seeing why we differ! Big hug! Heather

Heather Victoria Held
I am a freelance calligrapher specializing in ornamental penmanship and offhand flourishing. I live in a small village in Ontario, about an hour west of Toronto. I have been happily married to my best friend Chris for over 30 years and we have a precious daughter Holly. I have studied extensively with Master Penman through the organization Iampeth and the Spencerian Saga. I am currently an active member of the Royal City Calligraphy Guild. If I am not working with the pointed pen, I am studying medieval and renaissance illumination or botanical painting techniques. I love to spend time alone in the studio working on my art or outside walking.